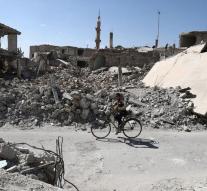 damascus - As a result of the Russian air strikes in Syria, according to the Syrian Observatory for Human Rights nearly 10,000 people died.

Among them were 3,800 people, of whom more than 900 children. Russia went intervene militarily on September 30 2015 the civil war in Syria.

The airstrikes Russia supports the army of dictator Bashar al-Assad. The city of Aleppo in northern Syria received in recent days to endure the heaviest bombardments of the 5.5-year-old civil war. The United States has threatened to sever cooperation with Russia in Syria continue as the bombing.