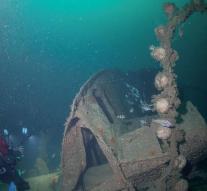 london - The wreck of a ship from the time of the Hundred Years War may be found in the soil of an English river. With the ship Holigost pulled the then English king Henry V against the French in the war that lasted from 1337 to 1453.

The wreck was identified on aerial photographs of the area around the River Hamble in Hampshire County. The Historical Society England called the ship "a tangible link" to Henry V, the BBC reported Monday.

The Holigost fought in several battles during the Hundred Years War to power in France. Researchers are now going to do with sonar equipment and drones further research into the mud of the river. They hope to get more information about shipbuilding in the fifteenth century, life on board and naval battles of that time.

The river was found in the thirties all the flagship of Henry V, the Grace Dieu.

Wreck of 600-year-old ship thought to be from Henry V war on France found in English river http://t.co/7MBpBszw2f pic.twitter.com/ZW0uAU9RuO