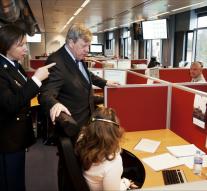 holly - Police have arrested a woman from Holly because she mistreated animals again. Agents found Monday in her home some heavy emaciated cats and dogs and a dead cat.

The woman, according to the police already gone several times in the error. She has received fines for this. But because there are now neglected animals at her have been found, the police decided to keep her longer.

She still heard Tuesday. A vet has determined that the deceased cat died from malnutrition. He also fears for the lives of other animals. They are collected in a different place.