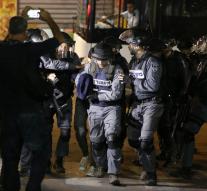 jerusalem - With new stabbings in Israel Friday four Arabs injured. Police arrested a Jew as a suspect. The stabbings occurred at four sites in Dimona in southern Israel .

According to the mayor of Dimona , the accused was a resident of the city and a "known to police". He would be responsible for all four to attack. The recent days, there were more sting incidents in Israel. Thursday, were among five other people wounded in Tel Aviv by a man who attacked them with a screwdriver. He was shot by a soldier.