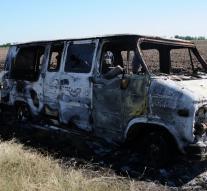 - In Mexico, a van which two Australian surfers throughout the land, burned recovered. In the vehicle were the charred remains of two people. Most likely the Australian men who had been missing since November 20th. It is still unclear what exactly happened.

Mexican authorities have confirmed that the van is indeed the Australians Dean Lucas and Adam Coleman (both 33 years). Family and friends are now underway to identify them using DNA testing. The Australian Foreign Minister Julie Bishop fears the worst. " Our thoughts are with the families and friends of these two men who have been missing for some time. I am seriously worried about their fate. "

The van was found in the state of Sinaloa. The state has a very bad reputation and is known as one of the most dangerous places in Mexico. There are many gangs and drug cartels operate.