Home / World / 'US talked about coup against Assad ' 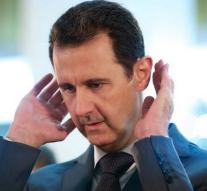 - US government officials have approached secretly figures from the regime of Syrian President Bashar al-Assad in the hope that dropped him. This was reported by The Wall Street Journal reported Thursday.

The Americans began to probe the army officers from the Alawite minority, when in 2011 the protests against Assad were followed by desertion of soldiers from Assad's forces. The reported multiple sources according to the Wall Street Journal. The officials would the regime also tried to persuade less bloody to proceed. The ruling Assad clan consists mainly Alawite. Those religious minority constitutes about 10 percent of the population.

In 2012 attempts were to change the regime from within specified and Washington went looking for rebels.