Home / World / US pay compensation after attack on MSF 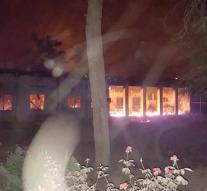 - The United States will pay compensation to the families of the victims who died in the bombing of a hospital of Doctors without Borders ( MSF) in the Afghan city of Kunduz. That the US Department of Defense announced Saturday . The US has also promised that they will pay for the reconstruction of the hospital.

At least 22 people died in the attack on the hospital last week. 33 people are missing, including 24 MSF employees. American fighter jets carried out the bombing. The US has now acknowledged that the attack was a mistake and apologized.

The Ministry considers it important to the consequences of the tragic incident at the MSF hospital to face, writes the Pentagon. It is still unclear how much money is earmarked for the compensation and rehabilitation of the hospital.