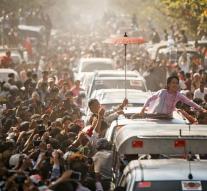 - The United States easing trade restrictions on Myanmar to let shipments through its ports and airports for a period of six months. This was announced by US officials on Monday.

With the measure, the US wants to support the opposition party of Myanmar after the historic election victory in November. Nobel Laureate Aung San Kyi won her National League 's first free elections in 25 years. The lighting of the trade sanctions also apply to port terminals and airports are on the US black sanctions list.Last month it was revealed that major US banks such as Citigroup, Bank of America and PNC Financial cuts in trade finance with Myanmar. This after the discovery that the main port terminal in the country is run by a businessman who is blacklisted by Washington.
NEW