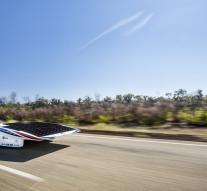 - The Dutch student teams from Twente , Delft and Eindhoven remain leading in the World Solar Challenge, a prestigious competition of solar cars across the Australian desert . After three days and halfway through the race , Team Twente managed to hold the lead. The Nuon Solar Team from Delft ended day three on the second place . The team from Eindhoven participates in another class , the category of family cars powered by solar energy , and is a close second .

The participants have approximately 3,000 kilometers through the Australian desert drive from Darwin in the north to Adelaide in the south. They are now about halfway.