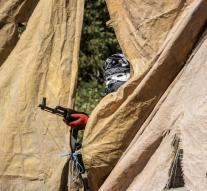 diyarbakir - Turkish security forces are hunting for bank robbers killed four Kurdish militants . It is not clear if the Kurds were the robbers . The incident took place in Bismil , in the southeastern province of Diyarbakir , said Wednesday the authorities in the region .

The robbers were out on the contents of a transport of cash from a Turkish bank and took off with the equivalent of 33,000 euros and two firearms. The uprooted security forces got hold of the Kurds and were with them in a gunfight.

The violence between Turks and Kurds since July flared after a cease-fire which lasted 2.5 years. Since the resumption of hostilities, 120 policemen and soldiers, and hundreds of Kurds killed.