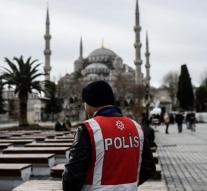 - A Turkish court on Sunday decided to extend the detention of ten Syrians in connection with the suicide attack January 12 in Istanbul. A Syrian born in Saudi Arabia blew himself in the center of the city in a tourist group. His action took ten Germans living. Fifteen others were injured.


The suspects are accused of premeditated murder and membership in a terrorist organization. According to the prosecution had ten direct relationship with the man who blew himself up.
Earlier, the judge ordered the release of six others for lack of evidence. It is not yet clear whether the three Russians who were arrested in connection with the attack in the resort of Antalya, this week to appear before the court to hear something about them is decided.
NEW