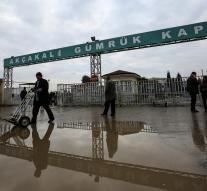 ankara - Four Turkish fighter aircraft of the type of F- 16 on Sunday attacked by rockets fired into Syria and they have "given an appropriate response". This, the Turkish Armed Forces announced Monday.

It is not known what is meant by the appropriate response. It is the first time that the Turkish Armed Forces report to have reacted in such a case. In previous incidents involving Turkish patrol aircraft along the border were besieged from Syria, there was no mention of a Turkish response.