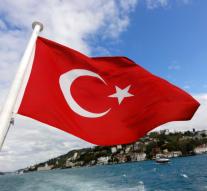 ankara - Turkey has decided its military personnel in Bashiqa camp near the northern Iraqi city of Mosul to " reorganize ". The office of the prime minister said Friday that this is done in consultation with Iraqi officials, after the deployment of these troops was a dispute arose with Baghdad.

The office of the Turkish Prime Minister said in the declaration that an agreement is reached " to work on the creation of mechanisms to deepen cooperation with the Iraqi government in security issues ". Turkey did not make clear how the ' restructuring ' would imply.

Iraq demanded that Turkey withdraw its troops was at the camp in northern Iraq. The deployment of several hundred troops there, according to Iraq took place without informing or coordinating with the government in Baghdad.

The Turkish Prime Minister Ahmet Davutoglu made ​​the troop movements last weekend off as a routine matter. He stated that the Turkish Armed Forces for almost a year ago had set up an encampment near Mosul in cooperation with the Iraqi authorities. According to him, the camp was set up at the request of the governor of Mosul and in coordination with the Iraqi Ministry of Defense.

The purpose of the presence is training militias for the fight against the Sunni extremists of Islamic State (IS).