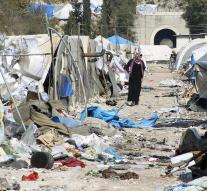 - More than 3,000 Syrians have a few hours to cross the border with Turkey, fleeing from advancing Syrian troops in the northern province of Latakia. These are Turkomans and Arabs, according to the Turkish disaster organization AFAD Monday.

It is expected that several thousand others come to Turkey. A camp that houses mainly Turkomen in the Syrian village Yamadi, was evacuated. The troops of Syrian President Bashar al-Assad pull up, supported by Russian air strikes.