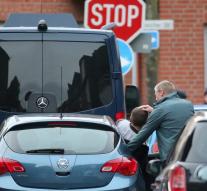 aachen - The seven people Tuesday in the German town of Alsdorf, near Aachen, were arrested, get an apology from the police. They were arrested in connection with possible terrorist acts, but that turned wrongly. One of those arrested would really have resembled a wanted terror suspect.

Police in Aachen is now planning to offer the seven written apology, reported a spokesman Wednesday. In addition, agents want to meet the seven personally to explain their action further.