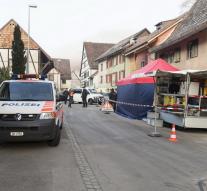 schaffhausen - A Swiss mother and her daughter during a violent quarrel stabbed them both spouses. That's what the police said Monday.

The 56-year-old father and his 26-year-old son were found in a home in Schaffhausen. Neighbors had alerted the police when they heard the noisy quarrel. The women had not fled.

The young couple lived according to the Swiss newspaper Blick until recently in the parents. In addition, regular violent quarrels broke loose, even between the two men. The last time it was just been a little quieter in the house.