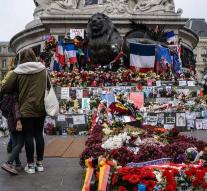 salzburg - Two men suspected of involvement in the attacks in Paris last month, have been arrested over the weekend in the Austrian city of Salzburg. The men were arrested at a refugee center.

According to the newspaper Krone are a Frenchman of Algerian descent and one Pakistani roots. They were false Syrian passports as refugees on the move and would join with the perpetrators of the attacks on November 13 on the Balkans have come to Europe.

The two were arrested Monday in Salzburg in a shelter for asylum seekers. Krone reported Wednesday that cooperation in the case with the French intelligence service. About a week ago, were also arrested two suspects in a shelter in Salzburg. They also are suspected of belonging to the terrorist group Islamic State.

There are rumors that they were waiting for orders to commit new attacks, reports The Local. A spokesman for the Austrian Public Prosecutor's Office can not confirm those rumors. The spokesman declined to say that it examines whether the pair actually has ties to the terrorists who murder and destruction sowed in Paris.