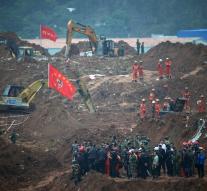 shenzhen - A former top official in China committed suicide after the fatal landslide earlier this month in the southern Chinese city of Shenzhen. The man was responsible for managing a large storage building waste. Which collapsed after a rainstorm and buried in this way dozens of buildings in an industrial complex. Four people were killed by the disaster, while seventy others missing.

The Chinese government announced a few days ago that human error caused the landslide. According to authorities violated its rules by people who had built the great mountain waste. The owner of the mountain had the disaster for a few days received a warning, but it hit the crossbar.