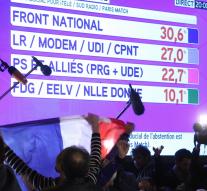 - The French Socialists retire next week in the second round of regional elections back from the north and south- eastern France. In those regions cited the National Front Sunday, according to the first estimates, a great victory.

By not participating in those regions voters on December 13 have to give their support to the center-right bloc of ex- president Nicolas Sarkozy, reasoned party leader Jean-Christophe Cambadelis. In this way, the Socialists hope the anti-European and nationalist party of Marine Le Pen to keep out of the saddle.

National Front leader Marine Le Pen and her niece Marion Maréchal-Le Pen in both regions would receive more than 40 percent of the vote, the Socialists and Conservatives far behind.