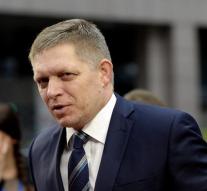 - Slovakia wants to include no Muslim refugees. That said Prime Minister Robert Fico Thursday in response to the events in Cologne and Hamburg, among others, where women are assaulted during the New Year.

"We do not want in Slovakia, anything can happen, as in Germany," said Fico at a press conference. Slovakia went before, like the Czech Republic, Hungary and Romania, do not accept the scale of the European Union for refugees. Slovakia must absorb 802 refugees.

In 2015, 169 people asked for asylum in Slovakia, but was only granted to eight of them.

Cologne did after the turn of the year 121 people are reported stolen, with a quarter of the cases there was also a sexual assault. According to the German newspaper Die Welt, which relies on an anonymous police source, most of the perpetrators were asylum seekers from Syria. Hamburg came within seventy declarations, two in Frankfurt and in the Swiss city of Zurich 25. In a quarter of all cases, the next robbery was going to assault.