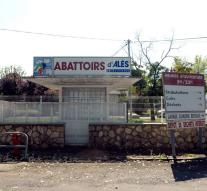 HSUS L214 in April and May for ten days had someone in the slaughterhouse with a hidden camera. The video images show scattered Wednesday, according to reports by French media " unprecedented atrocities " against animals. The society is named after a section of the law which protects animals.