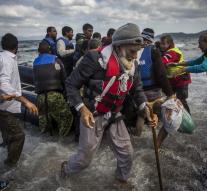 brussels - Greece will receive 5.9 million euros from the European Commission to improve the reception and registration of refugees. The money is sufficient for the next four months to bear the costs of transporting at least 60 000 migrants from the islands to the mainland, the committee will know Monday.

The contribution comes from the Emergency Fund for Asylum, Migration and Integration and should only be used for people who are registered and whose fingerprints were taken. From the Greek mainland part is redistributed across Europe. It was previously agreed 160000 refugees from Greece and Italy to relocate.

Greece is the time to come collect 50000 refugees, as government leaders decided Sunday night at a summit in Brussels on refugee routes. This group is divided over asylum centers and host families.

This year already received half a million immigrants in Greece, mostly Syrians who risk crossing from Turkey. Because the islands where they can not handle upcoming daycare open the Greek insistence of Europe registration centers. The first was recently opened on Lesbos and the next time will also be set up such centers on other islands.

The European border agency Frontex plays an important role. This organization will also help to register migrants along Greece's borders with Albania and Macedonia. Also in Bulgaria, Croatia and Serbia will strengthen Frontex.

Frontex early last month to 775 additional border officers, including 610 for Greece. The EU Member States have now pledged 326. That means that the operation can not be extended to include, according to Frontex director Fabrice Leggeri.