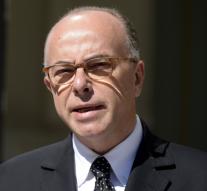 bordeaux - The accident with the bus at Puisseguin in the Gironde department is the most serious since more than thirty years in France. In 1982 arrived at Beaune in eastern France 53 people in an accident with a bus were killed, including 44 children.

Minister Bernard Cazeneuve of Interior has yet announced Friday to travel to the scene of the accident. President François Hollande said in a reaction to be very shocked.

The bus carrying elderly was Friday left the village Petit-Palais-et-Cornemps en route to a destination elsewhere in France.