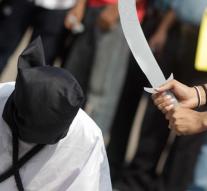 - Saudi Arabia appears to be about more than fifty to behead those convicted of terrorism. Among the convicts are three men who were minors when they were arrested.

The publication of an article in the newspaper Okaz, which has close ties to the Saudi Interior Ministry has families of the convicted and human rights organizations believe that the execution could take place anytime. According to insiders, the plan to behead the men in several cities in the country, most likely after Friday prayers, reports the British newspaper The Independent.

Saudi Arabia has this year already 151 people to behead, but this would be the first executions of terrorism.