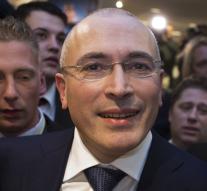 moscow - A court in Russia has issued an arrest warrant for Mikhail Khodorkovsky. The former owner of oil company Yukos will stay for a few years abroad, since he was released early in 2013 from a Russian prison. He sat there a long prison sentences for tax evasion and fraud.

The message about the arrest warrant was reported by RIA Novosti news agency on the basis of a Russian Review Committee. Khodorkovsky now resides mostly in London, but still regularly criticizes President Vladimir Putin. The warrant would result from the previous prosecution.

Khodorkovsky was once Russia's richest man and campaigned for a more open society and democracy. His arrest and conviction then escalated into a misty auction of Yukos, which was transferred to Rosneft, a state oil company.