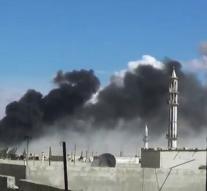 moscow - Russian troops in Syria are equipped with missile systems. These are to protect against possible attacks with hijacked fighters, said the head of the Russian Air Force Thursday.

According to Colonel- General Viktor Bondarev can be hijacked jet fighters in neighboring Syria. The aircraft would then be used to attack Russian soldiers in the country.

" We have all the potential threats identified ", Bondarev said. " We not only fighters, bombers and helicopters sent to Syria, but also missile systems ", he told a Russian newspaper. " We have to be prepared. "