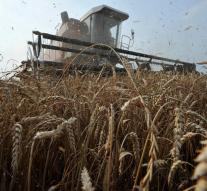 - Russia not only gives military aid to its ally Syria, but also delivered a large quantity of wheat : 100,000 tons. Food aid has arrived in the country for more than four years of a bloody civil war is raging, told the Russian Ministry of Agriculture Tuesday.

It took the Syrian government struggling to buy enough wheat on the world market. Western sanctions against the regime are not applicable to food. However, the finance grain imports is a problem, since Syrian banks fall under the sanctions.