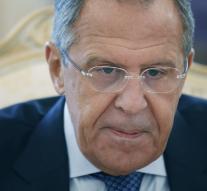 moscow - Russian Foreign Minister Sergey Lavrov Tuesday met the special envoy of the UN for Syria , Staffan de Mistura . The Italian- Swedish diplomat De Mistura has been tasked in July last year, as a special envoy , to see if a political solution is possible for the conflicts in the Syrian civil war .

Russian President Vladimir Putin has stressed that his country has no conflict on the ground in Syria will conduct and striving for a political compromise.

He reiterated that Russia is "the legitimate government" with supporting air strikes. Putin said the Russian military intervention "first the legitimate authority in the country ( the government of President Bashar al-Assad ) must stabilize and then must create the conditions for a political compromise", reported the Russian news channel RT Monday .