Home / World / Russia claims to weapons of mass destruction IS 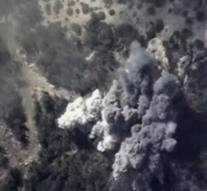 moscow - With dozens of bombing targets in Syria, the Russian airforce terrorist organization Islamic State (IS), in his own words gave a big blow . "Russian air strikes have resulted in destruction of the bulk of ammunition , heavy vehicles and equipment IS" , claimed the Russian Defense Ministry Tuesday.

In all, the Russians attacked the last 24 hours according to the Department of IS 86 goals in Syria . The Sukhoi bombers were , inter alia, on command posts, ammunition and weapons depots , vehicles and bases , summed TV channel RT on. Russia is the main foreign ally of the regime in Damascus.