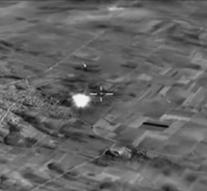 moscow - Russian warplanes have bombed the headquarters of the militant movement Liwa al- Haqq in Syria . This would two hundred insurgents were killed , including two commanders. This was reported by the Russian Defense Ministry Friday .

In another attack in the region of Aleppo says Russia once again to have slain hundreds of insurgents. It is unclear how the ministry until the count has come.