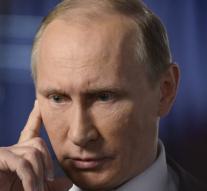 moscow - Russia plans to build a military base on the Kuril Islands, an archipelago on the edge of the Sea of ​​Okhotsk and the Pacific Ocean. That Minister Sergei Sjojgu of Defense announced Thursday.

Possession of the islands until today hotly contested by Japan, which left had to watch the Russians to occupy the end of World War II the Kuril. The decision of the Kremlin takes a toll on the already cool relations between Japan and Russia. The two countries have just never signed a formal peace treaty by taking the Kuril Islands after the war.