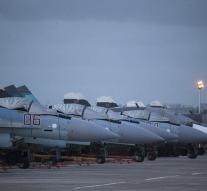 moscow - Russia appears to have begun with the recall of troops from Syria. On Russian television were seen Tuesday images of military equipment in a transport plane loaded with which the suggestion that they were to leave the country.

Russian President Vladimir Putin announced Monday that Russian troops would come home Tuesday. According to the president, the armed forces have achieved their objectives to a great extent.

TV images of Rossiya 24 showed how men belongings in a large transport aircraft of the type Ilyushin Il-76 loading were at the airbase Hmeymim in Latakia province.

The Ministry of Defence elsewhere stated that the military had begun preparing airplanes to bring supplies to Russia.