Home / World / Russia and the US can bring peace to Syria 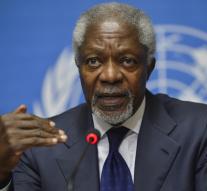 " In this situation, Russia and the US is very important. If they find a way to work effectively together, we will reach a solution ", said Annan at a meeting with students and diplomats. In 2012 he tried already own an end to the war to Syria, but without success.

Annan confidence in the international consultations on Syria which takes place Friday in Vienna. Since Russia and the US will engage in conversation with each other.