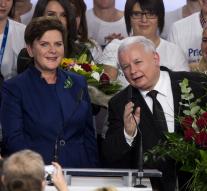 - The conservative opposition party Law and Justice (PiS) of former Prime Minister Jaroslaw Kaczynski was the winner of the parliamentary elections Sunday n Poland. In the preliminary official results given the party Monday 37.6 percent of the vote, which is well ahead of number two, the Civic Platform.

The platform gets more than 24 percent. The liberal Civic Platform of the current Prime Minister Eva Kopacz was eight years in power in Poland. The final election is Tuesday established.

The eurosceptic Kaczynski feels little to accommodate Muslims in the predominantly Roman Catholic country. His party wants to allocate more money to support the poor and against early accession to the eurozone. PiS promised in the campaign even more money for families and retirees and support for farmers.