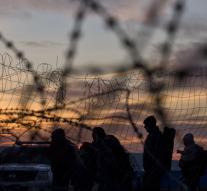 brussels - After Italy are now refugees from Greece redistributed across Europe. Wednesday flies a group of thirty from Athens to Luxembourg, where they can continue their asylum procedure.

The EU decided to relocate in September 160 000 refugees to relieve Greece and Italy. So far, 86 Syrians and Eritreans from Italy moved to Finland and Sweden.

The first flight from Greece gets much attention. Prime Minister Alexis Tsipras is there, as well as EU Commissioner Dimitris Avramopoulos (Migration) and the Luxembourg Minister of Foreign Affairs. Also chairman of the European Parliament Martin Schulz traveling early in the morning to the airport to say goodbye to the group.

Avramopoulos speaks of " a symbolic moment, but also a crucial first step ". " It's time to gear up. " He's counting on other countries to sign up to take on refugees.