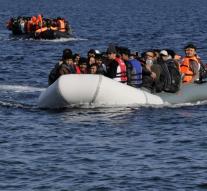 athens - At least nine refugees drowned Tuesday for the art of the Greek island of Kos. According to the Greek coastguard hit the boat in which they were in the early morning in rough seas around. Among the victims were four children.

Five people are missing. The Coast Guard was able to save seven people from the water. The rescue operation was hampered by strong winds.