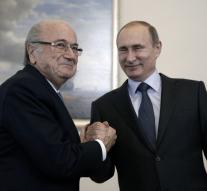 zurich - The suspended chief of FIFA, Sepp Blatter, should get the Nobel Peace Prize. It reiterated Russian President Vladimir Putin Thursday. The Swiss Blatter has done a lot for the sport and 'is a very respected person,' Putin said at a news conference.

The Swiss weekly Die Weltwoche Blatter has been voted Swiss of the year. Blatter is currently embroiled in a major corruption scandal at FIFA. Putin assured his audience that Russia has been fairly awarded the 2018 World Cup. Putin said earlier in an interview with Swiss television even though he felt that Sepp Blatter deserves the Nobel Prize. DopingOp the area of ​​doping in sport showed Russian President also does well. Russia is against doping in sport, if someone uses drugs he should be punished and people should always be held personally responsible for doping, said the president. The statements come a month after the country has been provisionally suspended by the International Athletics Federation IAAF because of years of systematic doping practices. In Russia, there was widespread use of performance-enhancing drugs and methods. In addition, positive tests, including a fee, obscured, concluded WADA, the international anti-doping agency.