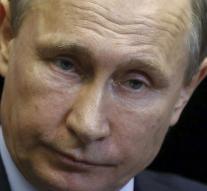 moscow - Warm words of Russian President Vladimir Putin for Donald Trump, who wants to be for Republicans president of the United States. 'He's very flamboyant, very talented, no doubt about it. He is an absolute leader in the election race,' said Putin during his annual news conference.

Putin pointed out Thursday that Trump wants to improve ties between Moscow and Washington. \x26amp; quot; How can we not welcome? Of course we welcome it. \x26amp; quot;

Trump has in recent months taken a few times for Russia. Thus he supported the Russian bombing in Syria. He also wanted pro-Russian rebels in eastern Ukraine does not blame the downing of flight MH17. \x26amp; quot; They said they were not \x26amp; quot ;, said Trump.