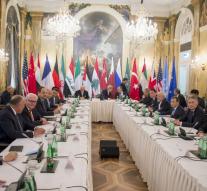 - At the international meeting on Syria in Vienna would circulate a proposal that mention of a proposal for a ceasefire. Then there would be a transitional government to be installed. In the transitional regime, there should be room for President Assad and the Syrian rebels, as reporting anonymous diplomats.

It is not yet known how long it should remain transitional regime. All day meet leaders of various countries on the resolution of the escalating war in Syria.

Prior to the top, there was little hope until reaching an agreement. According to the NIS would be relieved that at all was a summit on Syria. "

Saudi Arabia and Iran, both present and sworn enemies of each other, during discussions placed as far apart as possible. It is the first time that the two countries meet each other together internationally.