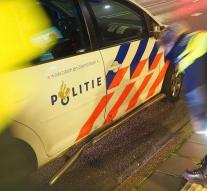 rotterdam - Privacy Experts fear that the new Police app, which agents will henceforth be sent out, can take care of some problems. In AD they say that the likelihood of abuse and identity fraud is enormous.

" I am surprised that constables may also use private time in this unit. Private agents will install other apps on their phone, such as games ", says Jaap-Henk Hoepman from Radboud University Nijmegen in the newspaper. He points out that the app, which allows agents include personal information can quickly search, or should be secure itself, but other apps on a smartphone that is not often. With all possible consequences.

Ton also Siedsma Bits of Freedom places are questioning the security. " If I were a criminal, I would certainly try. Through this app you come to police information which may constitute money as possible. Or can be used for identity fraud. "

Police spokesman Helma Huizing of the National Police says it's working and private section on the smartphones of agents is strictly separated. " You must log in separately. This makes it much more difficult to break in and view sensitive information. " That agents their smartphone now also outside of work may be used, according to its deliberate. " It is no longer necessary to walk around with two phones, which is more user friendly ", she says in the newspaper.