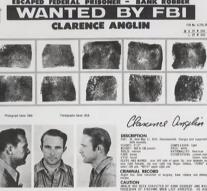 - Frank Morris, John Anglin and his brother Clarence in 1962 escaped from the infamous Alcatraz prison on a small island off the coast of San Francisco. Always it was thought that they did not survive the dangerous crossing. Unfairly , say relatives of the three who even claim to have proof.

According HLN.be History Channel sends morning a documentary which sheds new light on the case. Two nephews of the escapees brother John and Clarence say they have evidence that the men survived the crossing. Indeed, John and Clarence were still alive. The evidence is in accordance with their cousins ​​David and Ken Widner commonly found Christmas cards that arrived after 1962. It will contain the signatures of two brothers who are authentic according to an expert. However, it can not be determined with certainty when the cards are sent. Photo Above Dien says the family to have a photo showing that men in the 70s were still alive. That trail led to South America. The photograph is shown in the documentary, alongside images of the excavation of the elder brother of John and Clarence. By comparing his DNA with DNA from bones washed ashore in 1963 in San Francisco can be ruled out that these were the bones of John and Clarence.

Spectacular ontsnappingHet trio escaped in 1962 in spectacular fashion from Alcatraz. Papier-mâché made triplet their heads after her and all. So they could keep guards during their round fooled. Then they broke out with spoons scraping through a passage through ventilation ducts. They climbed on the roof and built using raincoats a raft together.

The FBI did years of research into the escape of the three, but it led to nothing. The bodies were never found, so could not be ruled out that the three had survived the escape. In 1979, the investigation was officially closed.

Prisoners who escaped Alcatraz in 1962 "could be ALIVE 'http://t.co/EXM10EvFQE pic.twitter.com/zfrdXKwjbX - Daily Mail US (DailyMail) October 10, 2015