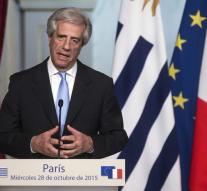 - President Tabaré Vázquez of Uruguay and his physician have a plane saved the life of a fourteen-year-old Frenchwoman. The girl was after eating a peanut allergy attack and fell into acute respiratory distress. After the crew had requested via the telecom whether a doctor was aboard, sped Vázquez - from home oncologist - directly to the child. His personal physician, and he had the girl immediately to an injection.

According to the mother of the child, the President thus saved the life of her daughter. Vázquez was on his way to France for talks with his counterpart Francois Hollande in Paris.