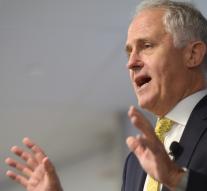 sydney - Australian Prime Minister Malcolm Turnbull has urged Friday for calm while the police from Sydney prepares for rallies around a mosque . Turnbull said it believed should respect each other . That's what he says to the people in a society made ​​up of different population groups , links . Turnbull blamed anti-Islamic protesters in the city the work of the police and security very difficult.

In the northwest district of Parramatta police fear clashes between anti-Islam demonstrators and their opponents at the local mosque . That was last week visited by a fifteen year old boy, Farhad Jabar, shortly before his Friday when a police officer shot and killed.