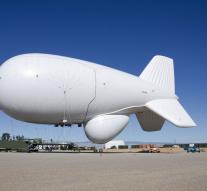 - An army zeppelin from 2.7 billion Wednesday crashed in the US state of Pennsylvania. The US defense was several hours behind the monster after it broke out at a military base in Maryland. The zeppelin landed in Montour County. On landing, no one was injured.

The airship was followed by two F16s, says the Pentagon. The military colossus came loose when the cables broke that the zeppelin was stuck to the ground. The cables have been attached to the airship, left a trail of destruction. Many utility poles were damaged, leaving some 20 000 people without power.