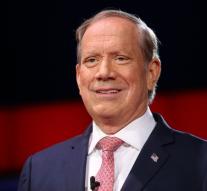 - Once again, a US presidential candidate withdrew. This time it's former governor George Pataki of New York State. According to the newspaper The Boston Globe, the 69-year-old Republican Tuesday US time to his supporters in New Hampshire said that he cease his campaign. A spokesman for Pataki did not confirm the news.

Pataki announced his candidacy in May this year. When he still said that a very tough climb up a steep mountain would be, but it has not stopped me in the past. In the latest polls among Republicans in New Hampshire, where Pataki most of the time campaigning, the candidate received 0 percent of votes.

According to the newspaper The Boston Globe did not succeed the former governor to get enough money for his campaign together. He has never taken part in the great debates, but he had to settle with television appearances where fewer viewers tuned in.

The choice of Pataki follows the decision of Republican Senator Lindsey Graham, who last week announced his campaign to stop the presidency. The withdrawal of Pataki has only a slight impact on the Republican race for president because there are twelve candidates, including Donald Trump. Who needs at least not to count on the support of the former governor. Pataki calls him unsuitable as president .