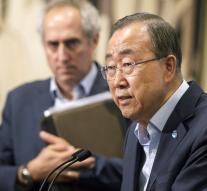 - The participants in the Syria- concert in Vienna must be flexible. UN Chief Ban Ki-moon has said, the BBC reported Friday. He calls the five main parties in the course of consultations to abandon " national interests " and that can be exchanged for "international leadership". It is the United States, Russia, Iran, Saudi Arabia and Turkey.

" The longer they remain with their national interests, the more people will suffer and will suffer the world ", Ban said. " As I always say, there is no military solution. "