Home / World / Over 60 million for displaced persons in Syria 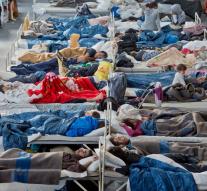 brussels - The European Commission makes 62 million euros for humanitarian aid to Syrians who are displaced within their own country. The emergency aid is to save lives in Syria, where the winter life of the most vulnerable people is even more difficult, let Commissioner Christos Stylianides (Humanitarian Aid & amp; Crisis) Tuesday know.

In recent days, all 43 million were allocated for emergency aid to Syrian refugees in Lebanon and 28 million for those in Jordan. The money goes to the World Food Programme (WFP) and the refugee agency (UNHCR), the United Nations, which thus provide shelter, heating, clean water, education and health.

Brussels made ​​further two million euros for emergency provisions for refugees stranded in Balkan countries such as Serbia and Macedonia. The UNHCR is now capable 200 000 refugees to provide warm clothing and temporary shelter, according to the European Commission.