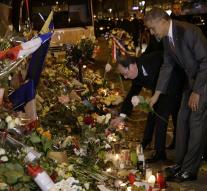 - US President Barack Obama on Monday shortly after arriving visited in Paris Bataclan concert hall, where before a massacre was perpetrated during a concert. Obama would thus dwell on the terror attacks in the city.

The president was at the concert accompanied by his French counterpart Francois Hollande, who brought earlier also visited Bataclan. In the concert shots terrorists during the attacks in Paris dozens of people dead.

Obama lays a rose during his visit at the makeshift memorial outside the concert hall. With folded hands, the President then held a moment of silence for the victims of the attacks. Upon his departure, Obama hit his arms around Hollande and Mayor Anne Hidalgo, who was also present.

The visit came as a surprise, because it was not on the public agenda of Obama. The president is in Paris for the UN climate summit. He was last week already involved in discussions with Hollande. When the leaders spoke out in Washington to step up military operations against terrorist group Islamic State.