Home / World / Nuisance caused by heavy rains in southern US 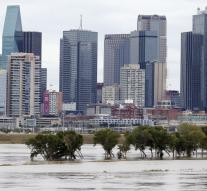 houston - The US state of Texas is Saturday (local time) weighed down by heavy rainfall. In Navarro County (Texas) roads had to be closed and derailed a freight train. Also an unknown number of homes were evacuated.

In some places fell in just over a day time approximately 50 centimeters of rain. The persistent rainfall caused flooding, which include a freight train on the rails flush. Two employees of Union Pacific could bring themselves swimming in safety, said a spokesman of the railway against CNN.

On other locations in Texas got people in trouble. So was looking for a man in the city of Temple refuge in a tree after his car was fast to get caught in the rising water. Firefighters pulled out to free the man from his predicament, reported television station KWTX.