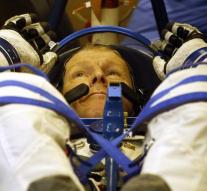 baikonur - Three new crew members are on their way to the ISS. The capsule with the Russian Yuri Malenchenko, American Timothy Kopra and Briton Tim Peake Tuesday was launched from the Baikonur cosmodrome in Kazakhstan. After about six hours of flying they arrive at their accommodation. They stay there for about six months.

Peace is only the second Briton ever going into space. Helen Sharman was the first in 1991. During his stay Peake will join the space in the London Marathon. He runs on the treadmill, with London images for themselves on an iPad.